Quest of the Therian Urn 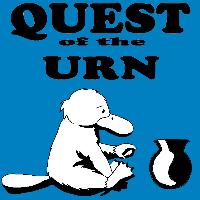 Premise: Bob and his friends try to break the curse of the Urn which turned them into animals.

Bob Landers, platypus - The reluctant leader and current owner of the Urn. He received the Urn from his father and, with Lucy, was the first to discover its strange properties. As the owner of the Urn and the camper he and his friends borrow, he is the unofficial leader of the group.

Lucy Billings, raccoon - She is the most intelligent person in the group, being not only able to fix appliances, but also to build apparatuses to accommodate the group's new bodies.

Tim the Tiger - Lucy's mentally slow foster brother. After his transformation, his thinking becomes much clearer; however, he still retains his interest in toys and cartoons.

Zeta, wolf - Before transforming into a wolf, she loved makeup and jewelry. After transforming, she became very defensive about cooperating with the others, but reluctantly joined and acts as the driver of the camper. She has a quick fuse, however, and sometimes acts very defensively about herself.

Arnold (Arn), pony - A free-spirited person who lives life to the fullest. He loves skateboarding and being with girls. Zeta is his current girlfriend.

Bob's Mom and Dad - Bob's mustachioed father found the Urn at a garage sale, saying it begged to be picked up. Bob's mother not only gives the group money and the keys to her camper, but also tips them off about a professor at UCLA (see the Professor below). Both of them originally disbelieve Bob and Lucy's story, thinking it to be a dream, which quickly changes the next morning.

The Fuzzies - The gang briefly met these independent musicians on the road. They invited Bob and his friends to join them, but Bob ultimately decided against it.

The Professor - An antiquities professor at the University of California, Los Angeles, who takes a gradual interest in the Urn and its behavior.

Kwon Pei - A woman from the Robotics Department who has taken a quick interest in the Urn. She uses the Urn to get several manuals on the Urn itself before turning into a rabbit.

Quest of the Therian Urn homepage

Community content is available under CC-BY-SA unless otherwise noted.
Advertisement